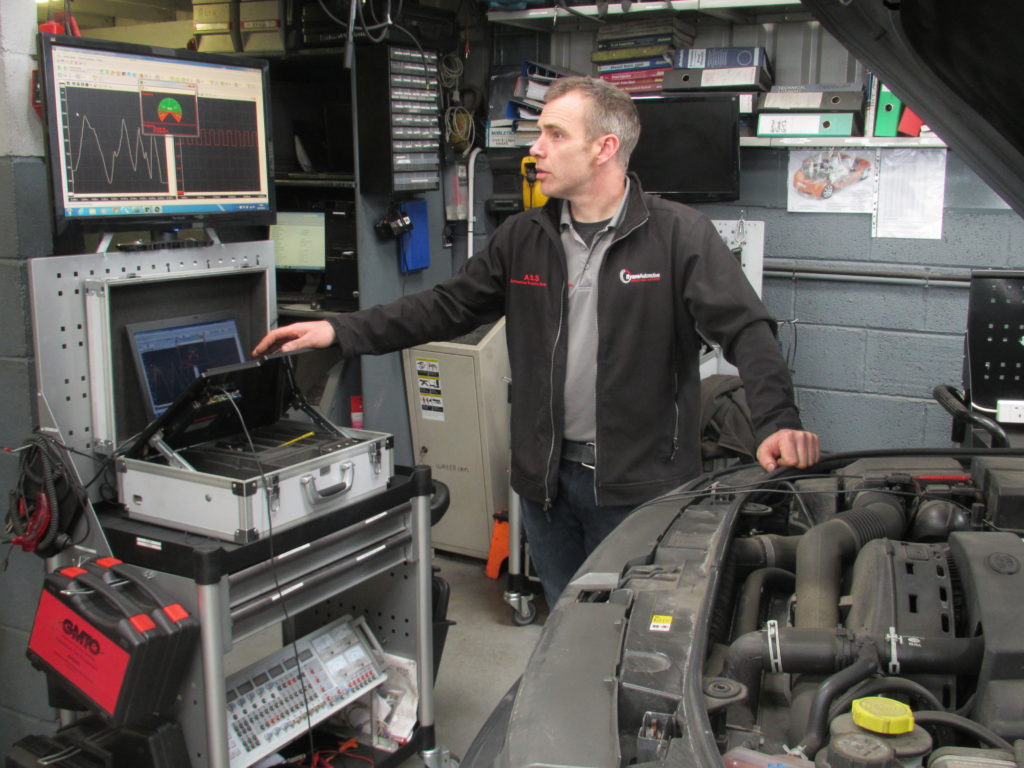 Prodiags is a respected learning environment which has now expanded abroad

In Finland, Prodiags has become well-known to many in education and training in the automotive industry, but due to the developmental efforts of its developers and producers, the learning environment has gained a foothold and the appreciation of its users abroad. One of Prodiags’s enthusiastic users is to be found in Ireland.

Founded in 1997, Ryans Automotive Ltd is a highly respected multi-player in the automotive aftermarket.
Ryans Automotive is backed by Seamus Ryan, who started his career as a Ford mechanic in 1989.
Eight years later, Seamus established his own car repair shop, which started operating in the yard of the family house. Two years later, in 1999, Brendan, the brother of Seamus Ryan, joined the company.
The company has its own vehicle workshop. Ryans Automotive also sells automotive diagnostic tools and supplies and also sells certain components such as engine control system parts to other workshops and garages throughout Ireland and also worldwide through sales through their website.
In addition, Ryans Automotive provides training and technical advice to other workshops nationwide in Ireland. Seamus also did the “Train the Trainer” course which helped him immensely in the delivery of training courses.

A major change took place in 2000 when Ryans new workshop and office building was completed. The geographical location is Enniscorthy, a town in the north of County Wexford, about 130 km south of Dublin.
In 2001, a professional diagnostic center was launched. The sale and distribution of diagnostic equipment was launched in 2007, with sufficient experience in the area gained through their own use and learning.
According to Seamus Ryan, Ryans Automotive’s leading idea from the outset was the continuous development of operations and the challenges of time and vehicle technology. Their own expertise has been actively maintained and invested purposefully in sustainable business management. Nor has quality customer service been forgotten.
Nowadays, its own workshop accounts for 30-40% of the company’s net sales and the rest is resulting in the sale of equipment, tools, parts and services. Training activities are being expanded, with training courses being run throughout the year and this expansion in business has resulted in extra staff being hired.

Seamus Ryan became very interested in Prodiags which he found online when looking for good resources to help him with the training he was providing. We had a lot of interaction and communication but we got off to a good start with Seamus Ryan’s interest in Prodiags’s electrical safety training course and its study materials.
Seamus wanted to familiarize himself with the Finnish SFS6002 concept, which by the way there is no such legislation in Ireland yet, by signing up for the relevant training organized by Prodiags. He arrived at the course in October 2017.
According to Seamus Ryan, in Ireland, similar basic training and legislation for high-voltage electric and hybrid vehicles for mechanics would be needed as required in Finland. He concluded that he had contributed, by his own interest in and attendance at the course, to providing similar basic safety training for vehicle mechanics in Ireland. He feels that it would be a necessity for all garages in Ireland to know the basics and know how to recognize potential hazards associated with high electrical voltages in a professional manner.
Seamus estimates that the final assessment of the Irish electrical safety examination should be similar to that of the Finnish SFS6002 standard. Absolutely there is no need to know everything, but a certain amount of training is vital and necessary.

Ryans Automotive resells Prodiags modules in its own online store. They also use them along with their own traditional training and as a supplement.
Seamus says Prodiags is respected by people in the Automotive industry as educators have experienced it as a suitable combination of theory and practice. However, he feels that Prodiags, like other durable learning platforms, requires a commitment from the student to achieve the desired results
With Prodiags trainer training management features, Seamus Ryan sees it as a flexible online environment. There is a need for an operator who actively organizes training for other automotive professionals.
In addition, a number of training courses, such as the Electric training course Basics (Level 1), will be followed by a final examination.

Prodiags is looking for Agents!

Do you want to be our agent and accelerate Prodiags’ growth – or do you know anyone in your network who is looking for a new or additional challenge?
Then contact us – we are looking forward to exploring the possibilities.